LIPPARD, LUCY. UNDERMINING: A WILD RIDE THROUGH LAND USE, POLITICS, AND ART IN THE CHANGING WEST. THE NEW PRESS, 2014.

Lucy Lippard’s UNDERMINING centers around the erosion of foundations, be them geological, cultural, ideological, or bureaucratic. Titled with a word that evokes a myriad of literal and metaphoric themes related to land use in a late-capitalist world, Lippard’s book interrogates the bureaucratic and ideological factors that threaten the sustainability of human habitats. Now living in New Mexico, the former New York curator takes her new home as a starting point that leads her through a far-reaching discussion that exposes the fractal-like relationship between the global and the local. The American West, as a site that represents particularly urgent resource depletion and complicated colonial land disputes haunted by the expansionist policies of the Manifest Destiny, serves as a potent jumping-off point for an examination of the current state of human-land relationships. Consistent with her earlier involvement with the Conceptual Art of the late 1960’s, Lucy offsets the main text with thoroughly captioned photographs on each page of the book, mobilizing her investment in conceptual and documentary photographic practices. These photographs and their captions deepen the discussion of the text and serve as part of Lippard’s project towards the de-isolation (and thus the increased relevance and effectivity) of art and the disintegration of the lines between art, life, and activism (168). She ultimately concludes with a proposal of this trifold approach to making and change as a main line of defense against further misallocation and destruction of hospitable land and dwindling vital resources, solidly reframing the relevance of her earlier curatorial and theoretical work for the new millennium.

UNDERMINING opens with an overview of choice examples of land dispute cases played out over the past few decades in the West. These cases make evident the dizzying complexity of colliding interests and the far-reaching consequences of colonialism, industrialization, and capitalism as well as offer perspective on the deep(ening) reservoir of instances of exploitation, both human and ecological. Lippard chronicles a mess of occurrences of disregard for native land rights, water waste, human precarity, mining and fracking abuses, legislative and bureaucratic blockages, political backtracking, and intertangled interests both noble and self-interested which stand in the way of future-focused conclusions. (18)

Factors of the obscurely affective and the asininely technical run throughout these conflicts and the author goes on to sow them through a contemporary re-evaluation of Land Art in the tradition of the 1960’s and 70’s. Admitting to having initially somewhat written off this conspicuous artform, in the 21st century, Lippard now contextualizes Land Art within a sociopolitical conversation around sacred sites and a contemporary, ‘post-nuclear’ reconsideration of the sublime. She pits the consideration of the local history and specificity of place against generalized touristic escapism, and critiques the insufficiency of the art world’s notion of “site-specificity,” which routinely trades the local reality of the land for an aestheticized, ideologically removed artistic reading. (81)

Lippard expands on this with a jarring example of just how intensely local lived experiences of land can differ from an outsider’s view. She discusses the notion of “atomic culture,” citing the case of Uravan, an ex-uranium mining town in Colorado that was dismantled and evacuated, deemed too hazardous to occupy. Reportedly more regretful at having lost the town and the mine within it than the family and friends that had been lost to complications from the radiation, the former residents of the town were strongly in favor of re-habiting the town and introducing a mandate for it as a destination for “nuclear tourism.” The hazards of living in a known toxic environment were considered by the locals as an “accepted risk” which characterizes a mindset and relationship to land that is distinctly formed by a reality saturated with toxicity and depleted of resources, in which the ideas of danger, tragedy, and livable land are adjusted to accommodate corporate industrial interests and to disregard sustainability. (116)

UNDERMINING is a focused yet meandering book that is replete with memorable anecdotes. The most poetic of these is perhaps the mention of the ongoing interrogation of the “Forever Problem,” or how to mark nuclear waste sites that have half-lives of (and will therefore be dangerous for) ten millennia or more. The various propositions by artists, engineers, scientists, and linguists are thoughtful (though perhaps futile) exercises on conceptualizing the future and the different ways we might read and communicate threats from the land we inhabit. Considering the proposed fields of plants engineered to grow in unnatural colors, forests of concrete spikes fifty feet high, and giant black holes dug out of the ground, the problem of matter and signification’s inability to outlive radiation immediately becomes daunting. (119)

The word “undermining” evokes the notion of having the ground dug out beneath you, but it also invokes the challenging of power. Lippard’s book is laced throughout with both precise data and overarching concepts that arm the reader with the intellectual tools to intervene on our future trajectories as landed, resource-dependent beings. Notably, this is all in self-interest. Lippard is well aware that the environment can adapt more infinitely and elastically than we can, that evacuated, toxic, exhausted lands become “nuclear sanctuaries” taken over by wildlife formerly displaced from destroyed habitats much more quickly than we could ever re-inhabit them (180). The world will change and leave its present species behind. The Forever Problem presumes human resilience, but the problem of a human future demands a much less optimistic view. Looking towards the possibility of sustainability, Lippard proposes the erosion of boundaries between art, life, and activism and between academic and professional disciplines only as an initial tool for a more necessary total undermining of the priorities of late-stage capitalism, colonial and expansionist policy, and post-atomic “accepted risk.” Excavating the sites of these collective missteps, Lippard theorizes the work, art, and values necessary to carve ourselves into a near future that will come regardless of our ability to survive it. 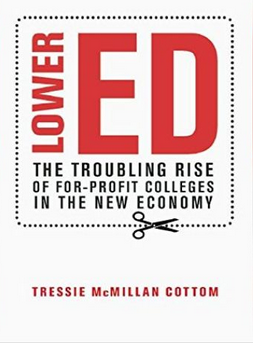 TRESSIE MCMILLAN COTTOM. LOWER ED: THE TROUBLING RISE OF FOR-PROFIT COLLEGES IN THE NEW ECONOMY. THE NEW PRESS, 2017 In about two-hundred pages, Doctor Tressie McMillan Cottom examines not what